Book titles:
Change anything: The new
science of personal success

The key to the heart of your brain!

The Limbic® Personality Check opens the door to the subconscious programs, which are configured in your brain. These programs decide in a fraction of a second how you react to certain triggers, what is important to you and finally what you will perceive consciously. You learn which filters your brain uses in order to create your reality. To find out, you have to answer 162 statements describing business situations with 'Correct' or 'Incorrect'. The aim is to answer these statements without thinking about them. We exploit the brain’s mechanism to conduct emotional evaluations automatically in the first instance. After that, the processing of this emotionally coded information takes place in the brain. This enables us to get an emotional personality profile of a person.

Using this procedure means that people avoid getting 'shelved'. There are no purely dominant or disciplined people as is often the case in other personality tests. People's reactions depend largely on context and thus one person with a rather dominant personality can be very balance-orientated in different situation. The result of the LPC includes a chart similar to the one displayed below: 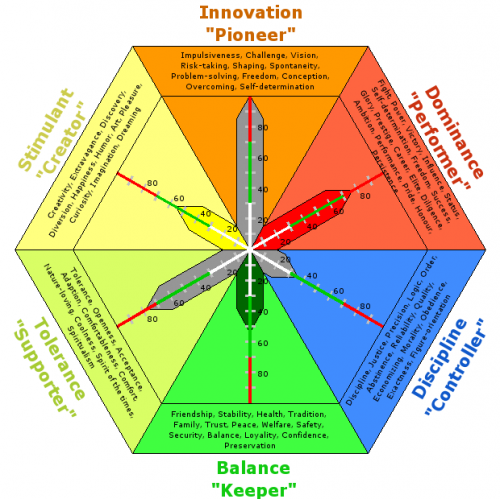 With this method you can see which forces also neutralize each other. In the example above, the opposite forces of dominance and tolerance are almost equally shaped. Nearly every other test would rate this person as dominant. Indeed, he/she is a dominant personality but the high tolerance will substantially 'soothe' the dominant behavior and as a result such a person tends to use his/her dominance in a much more human-orientated and conflict-reducing way.

Together with the Limbic® Personality Chart you will receive a detailed written analysis.